The epically-long holy days vacation is coming to a close this evening with the culmination of Sukkot. While much of the break has been spent relaxing under the Israeli sun, adventuring around the country with friends, reading books, learning history, trying to retain my (limited) Hebrew, and (shamefully) watching Netflix, I did escape the holy land for a week-long adventure in Greece on the island of Crete. I thought I’d recap that week and share it in a blog post with you all (admittedly, much less for your enjoyment, and much more for my own memory purposes). Thus, if all you’re interested in is hearing about the holy land you may want to take this week off from reading, but if you’re willing to go along with a little “Eat, Pray, Love”, read ahead…

After significant questioning and security at Ben Gurion airport (as always) we boarded a flight to Crete last Thursday. Minor background information: Crete is the largest of the Greek islands, located south of mainland Greece, and has served as a background to thousands (upon thousands) of years of history, including being home to the oldest European city, Knossos. Upon arrival Hannah, Mimi, Felice and I traveled to the first of two port cities on our itinerary— Rethymno. Besides being virtually incapable of pronouncing the city name, we also were unable to pronounce any street names (and I thought Hebrew was confusing), and thus spent some time getting ourselves lost in the city before being directed by locals to our hostel. Like the good little travelers we are we quickly dropped our bags, washed the “plane” off of our faces, grabbed our water bottles and got walkin’!

Rethymno’s ocean front edges were riddled with tourism (Greek beaches, olive oil stands, souvenir shops filled with evil eye pendants, you get the picture). While this proved slightly annoying, we learned quickly to dip into the more central areas of Rethymno’s old city to experience the slivers of authentic Cretian life and cuisine that still remained. We were pleasantly surprised by the cheap food options (a product of the unfortunate Greek economy and the current state of the Euro) and dined out most lunches and dinners at places recommended to us by the hostel. Our favorite meal was a dinner spent at “Maria’s Restaurant”, hosted by, of course, Maria herself. Maria was delightful and brought out a dozen tiny different plates of food— zucchini balls, beans, sautéed greens, stuffed peppers, tzatziki, homemade bread— along with a generous decanter of wine. Felice made kiddish for us (as it was Friday), and we enjoyed the meal, sitting in Maria’s restaurant long after the food was gone, relishing vacation and the freedom of travel we are privileged with.

In terms of ruins, Rethymno is home to two special Cretian sites. One of these is Arkadi Monastery, perched in the hills above the city. We spent one afternoon there wandering around, learning about the history of the monastery as well as the current state of the monastery (there are still practicing monks who live on the grounds). We also randomly stumbled upon a woman (who reminded me of my Greek aunt, Thea) doing a community art project. She invited us to participate, so we each got to do a drawing of the monastery from our perspective that will be added to a flip book containing hundreds of different visitors perspectives. If that wasn’t funky enough, on our way out we walked past the monastery’s ostrich enclosure (Religious significance? Not sure.) before heading back to the seaside.

The second Rethymno site was a fortress overlooking the old city that had been under various group’s control throughout the ages. While the interior was mostly deteriorated, an amphitheater, church, and mosque (that’s right, both) were still standing, along with the fortress’s walls. Mimi, our resident historian, and knower of all things gave us a brief history of Crete’s past and the state of the island under the Ottoman rule. What I found particularly interesting was the way that the Ottoman’s ruled the people they conquered— often allowing them to continue to practice their own religions (of course, at the price of taxes and unequal treatment under the Ottoman law). This explains the mix of Catholic and Muslim influences across Crete. Kinda crazy.

After wrapping up Rethymno we took a bus west, to the port city of Hania. Immediately we were struck by the laid-back vibe of Hania— far less touristy than Rethymno. We checked into our hotel, which was run by an adorable elderly Greek man (a complete Papu), and then were off on foot to explore the city.

Our favorite part of the city ended up being the seafood (this was coastal Greece, after all). It was downright crazy. I swear I ate squid or octopus every lunch or dinner, consumed my weight in fresh bread and ate more baklava than I am willing to admit. Every meal (even brunch) ended with a server bringing shot glasses and a generous supply of “Raki”, Crete’s signature hard alcohol, to the table. It was, in fact, the most disgusting thing any of us have ever tasted (and this is after becoming accustomed to Israel’s Arak). The plus side of the Raki was that it was always brought with a small serving of dessert on the house. Yay for free treats!

Hania was quiet, and besides meandering around the port and visiting the old city’s lighthouse, our favorite “site” was the Jewish quarter of the old city. We found the only lasting synagogue on Crete, Etz Hayyim Synagogue, and explored its grounds, talked with other visitors (all of which were Israeli), read about its reconstruction and sat under the succah, a temporary tent-like structure built out of natural materials that Jews eat meals under during Sukkot. It was interesting to see the Jewish influence on Crete, as we were told there are currently only ten practicing Jews in all of Hania, and it was nice to be connected to an element of Judaism during the Sukkot holiday.

The last big adventure of the trip came on Tuesday when Hannah, Mimi and I took a bus south to hike Samaria Gorge, a 10-mile gorge that ends at the seashore. The bus dropped us at the start of the gorge. We spent the next five hours scrambling down rocks, through creeks, across dried river beds and between groves of trees. It was cool out, but periodically there was a warm breeze that swept through the gorge. The trees were changing colors, and there was a distinct autumn scent in the air— something we hadn’t even realized we were missing living in the desert. It was calming, and a little bit heart wrenching as we all thought about the fall season we were missing at home (though I got told to be quiet quite quickly, as California’s seasons are no match to the east coast). Before we knew it the gorge had dumped us out on the seashore where we had a few hours to kill before getting on the bus back to Hania. I floated in the sea until I turned into a prune, then enjoyed some fresh squeezed orange juice and napped on the Cretian stone beach. #cassheaven

Our trip culminated with returning to the city we flew into— Heraklion. We spent an afternoon at Knossos, and thanks to a generous offer by Grandma Carol, were treated to a private tour of the ancient city. Our guide was incredibly informed and walked us through the history, reconstruction, and preservation of the site. Sometimes I have issues connecting to the history of a site, especially when so much of it has been destroyed and the history is complex, but our guide made it easy, clear and relatable (if it’s even possible to relate to life thousands of years ago).

We wandered around the port of Heraklion after our tour and sat down for dinner at a restaurant recommended to us by our guide. It turned out to be our favorite meal, and perhaps moment, of the trip. A simple, good meal of seafood and vegetables, with a miraculous view, great friends and an easy, stress-free trip behind us. This peacefulness was momentarily disturbed later that evening when my phone slipped out of my purse in our cab without my knowledge (not a surprising Cass move). I didn’t realize it was gone until we were back at our hotel, packing for our flight the next morning. While unfortunate, I was only mildly upset— and honestly far more thankful it was a phone lost in the Cretian abyss than a passport, suitcase or god-forbid person. Cest la vie, right?

I was surprised how much it felt like coming home when we returned to Israel Thursday evening. Hearing Hebrew and being able to read signs and understand the language again (albeit minimally) was comforting. Being surrounded by Israelis and Arabs, cramming on the train with millions of screaming children, walking through mobs of armed soldiers and passing through countless security checkpoints felt commonplace. Even arriving back in Beer Sheva felt familiar, and climbing into my dorm room bed felt (almost) as good as climbing into my bed in California. It took going away and coming back to realize that Israel is gaining strong footing in this little heart and soul of mine. How blessed I am to have another place to call home.

Big hugs and love to each of you. 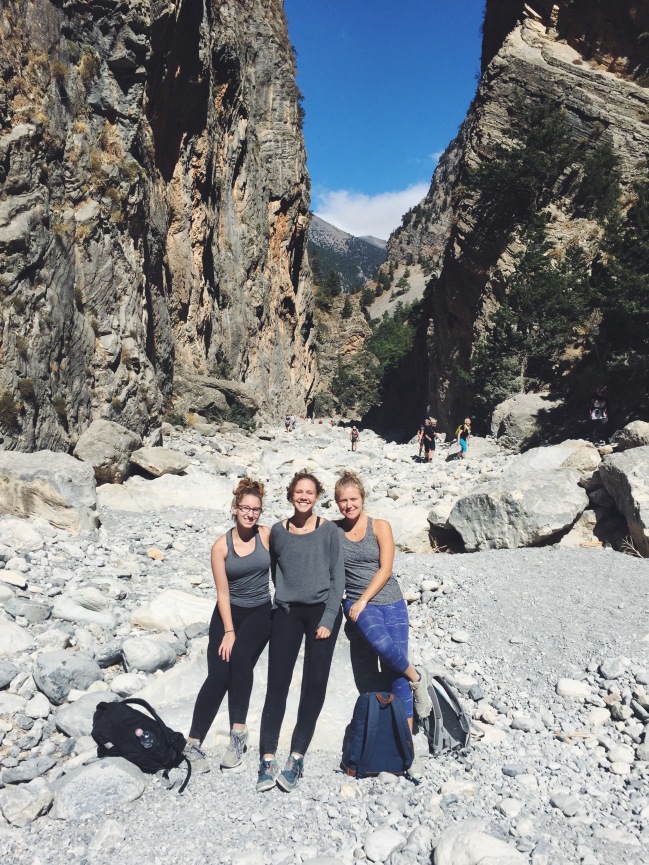 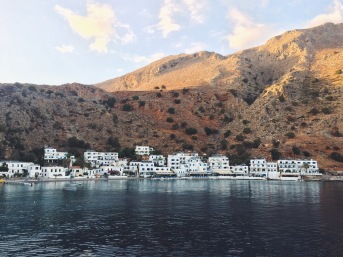 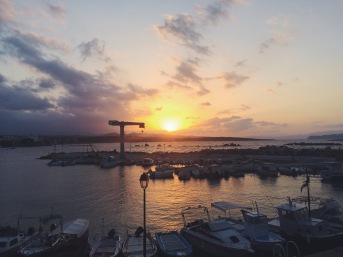 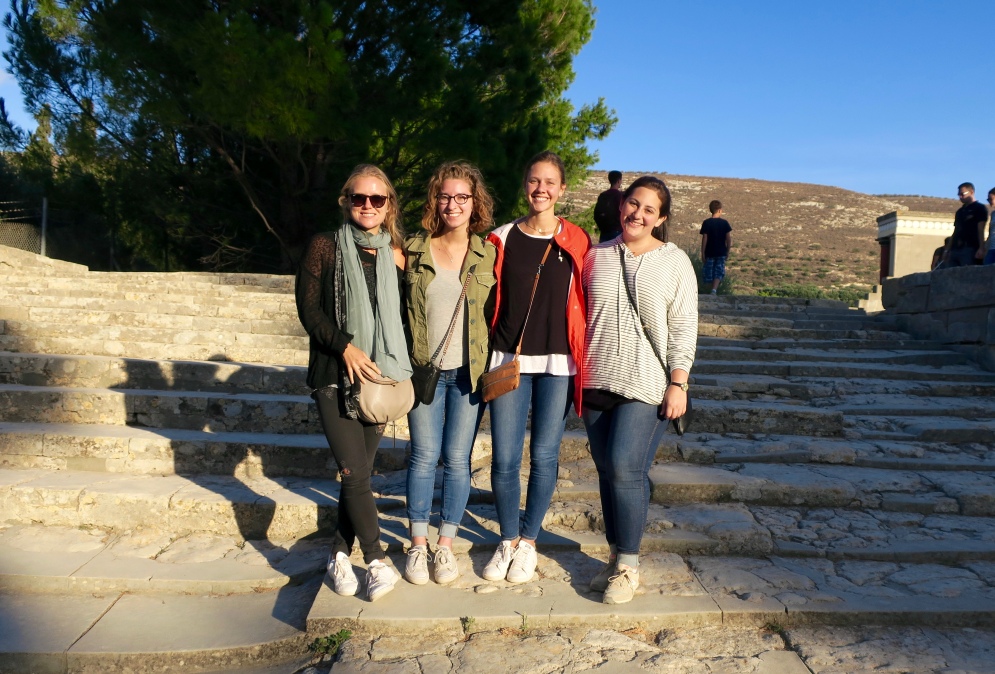 me, Mimi, Hannah R., and Felice visiting the ruins