I’ve been so caught up in the hoopla of the Jewish holidays and preparing to leave for a trip tomorrow that I almost forgot one of the most important items on my to-do list, le blog! The past ten days have been a cycle of inter-Israel travel, museums, sleeping, holidays and LOTS of food. My break, so far, has been both busy and relaxing. So, where to begin?

Last Sunday night marked the beginning of Rosh Hashanah, the Jewish New Year. I had taken up an invitation to spend the holiday with the Goors, who are Israeli-American and are family friends with our close Los Altos family friends, the Lisbonnes. The Goors (who I had heard much about, but had never actually met before) also kindly extended the invitation to my friend Mimi, as she had no home for the holiday. Sunday afternoon Mimi and I took the train up north of Tel Aviv to Raanana, where the Goors live. We found Dorothy (momma Goor) outside the translation, cheerful as ever, and drove back to their beautiful home. Mimi and I both realized as soon as we arrived that we hadn’t been in a true “American” house for almost three months— queue big smiles from us :). That realization, coupled with the amazing smells coming from the kitchen (cannot emphasize the quality of Dorothy’s cooking enough), gave us an immediate sense of ease and relaxation. It felt like home.

Most of Sunday afternoon was spent helping prepare the food for the Rosh Hashanah meal and party the Goors were hosting that evening. Dorothy had coordinated an elaborate meal of meats, potatoes, green beans, beets, salads, sweet rice, pomegranate seeds, smoked fish, the list went on and on. Needless to say, I was #happyCASS. While cooking, the kitchen was filled with the entire Goor family (Dorothy, Nim, Lea, Karen, and Daniel), along with Dorothy’s father Fred, who was visiting from Florida. We all had a blast discussing past and future travel, explaining the changes Los Altos had undergone since they left nine years ago, exchanging stories about mutual friends, and (most concerning to Fred) speculating about Hurricane Matthew.

By the time evening came around the food for the main meal had been cooked, the table had been set (name cards and all), Lea and I had prepared the appetizer plates with the nine symbolic foods, Nim had opened a generous amount of wine and guests were flowing in. In many ways, the evening felt like a Thanksgiving seder— a healthy, but not overwhelming, amount of religion and tradition, combined with warm company, abundant conversation and the best darn food you could ever dream of. I spent a considerable amount of time talking to the Goors cousins, one of which just graduated from BGU. Much of the conversation revolved around the US election. None of them could believe how far Trump has come (I assured them, neither could we), and many asked about what would happen if he won (I will stay abroad until 2020). Other topics included women’s sports in Israel (Karen is on the Israel national soccer team) and Shimon Peres’s legacy. When midnight rolled around I was exhausted, food-comatose, relaxed and beyond happy to climb into a real bed, in a real room, in a real house, surrounded by a real family. I hadn’t realized until I clicked off the light and was lying there in the dark how much I had missed that feeling.

After sleeping in Monday, and enjoying a lazy morning at home, Mimi, Lea, Karen and I headed off to the beach (a short, ten-minute drive from their home). With all the busyness of school in Beer Sheva and my trips to other places in Israel, I hadn’t been to the beach yet. It will come as no surprise to 99.9% of you that I felt this was a major sin. I cannot explain how happy I was, launching myself into the Mediterranean that afternoon. Ecstatic would be an understatement! The California child was back in her habitat (queue Mimi, from NY, rolling her eyes). We spent the rest of the day there getting sunburned (well, in my case tan because #Swedish) and relaxing in the waves. Undoubtedly it was one of my favorite afternoons thus far.

On Tuesday (yep, still the holiday) we drove to Jerusalem, as Fred wanted to take a trip to the kotel (Western Wall) and to walk around the old city. While Mimi and I had done both of these things many times, we were happy to tag along as Jerusalem never really gets boring or “less special”. After walking around the old city, kotel and shuk, we got back in the car, stopping at Mount Herzl (national cemetery) before heading to a delicious Arab restaurant for lunch (all kosher and most Jewish restaurants are closed on the holidays). The rest of Tuesday was spent napping, eating (more) and continuing to enjoy the company of the Goors. Dorothy drove Mimi and I back to the train station once the sun set, meaning the holiday had officially ended, and with that, we were on our way back to Beer Sheva… (A huge thank you to all of the Goors for inviting us into your world, letting us join your family, providing us with the yummiest meals, sharing wonderful conversation, and giving me the feeling of being back home for a few days. I am so thankful.)

After a randomly placed day of class on Wednesday (blame it on the Jewish calendar), a few of us headed back to Jerusalem on Thursday to explore the Israel Museum. The Israel Museum functions as the country’s national museum, holding a vast amount of Middle Eastern and Israel/Palestinian history and artifacts, while also including modern art exhibits, rotating shows, and an extensive sculpture garden. We spent time wandering through the Middle Eastern section, awing at large collections of thousand-year-old knives, delicate gold jewelry, large vases, and intricate coin collections. As with many museums, I was particularly fascinated by the jewelry. It’s always interesting to me to think about how little has changed in terms of style and function of jewelry over thousands of years. Jewelry is such a central part of many women’s (and men’s) identities and appearances, and the fact that ancient jewelry in many ways resembles modern jewelry is an interesting binding factor for women across history. I love that idea, and it is one of the reasons I make sure to invest in jewelry I love and will have for a lifetime. It holds a sense of timelessness. Maybe this makes sense, maybe not. I’m rambling, so I’ll leave it at that.

Actually, the real reason we were in Jerusalem on Thursday was to meet up with the rest of our study abroad group for a tour in the Old City of slichot activities (traditions done in the days prior to Yom Kippur). We met them shortly after midnight and entered the Old City on foot— weaving through hoards of people. If you’ve spent any amount of time in Israel you know that personal space is a nonexistent term in the Hebrew vocabulary, meaning that I was getting shoved, sweat on, brushed past, pushed, pulled and sneezed on constantly. FYI to any germaphobes out there: Israel is not for you. Anyways, along the tour we stopped at various significant sites, ending at the kotel. The kotel was packed with Jews of every denomination and level of religious observance, along with hundreds of heavily armed security personnel (welcome to machine gun central). Our group’s private guard mentioned to me it was likely there were a variety of Mossad and CIA agents in the kotel at the time we were there. Needless to say, the air was heavy with emotion. Cultural stimulation was at an all-time high.

We didn’t return to Beer Sheva until 6 am Friday morning— exhausted, cranky, dusty and overwhelmed. I slept most of the weekend, tended to my poor, tired skin (being abroad sure takes a toll on my acne), and cooked up yummy meals with friends. The past few days we have had off for Yom Kippur, the Jewish day of atonement. While I have used this time off to get logistical things in order and plan some more trips (what a surprise), I did manage to get out of the dorms last night and go to shul (synagogue) with my friends who are more religiously observant. The services were held in Hebrew, so I only understood parts. While not knowing a language, and being completely immersed in it for hours, can be frustrating, it’s also oddly meditative. I came out of the service with an unexpected sense of peace. We walked home quietly and slowly, through the barren streets (no one drives on Yom Kippur), discussing things that we had done wrong and people that we had hurt in the past year. This is a tradition of Yom Kippur— a reflection on your past year of actions and your intentions for the year to come.

Along with this tradition of reflection, many people spend time personally apologizing to those they have hurt or caused distress. One of my more religious friends, Felice, explained the theory of this last night, saying that it is important to apologize to both those you know you hurt and those you don’t know you hurt. She, for example, apologizes to all those she loves and closely values in life whether or not she knowingly wronged them. It’s no surprise that often, as humans, our actions pain people without our knowledge. Whether it be an act of selfishness, a coping mechanism, or just general insensitivity, it’s important that we own up to the pain we have caused others even if we weren’t aware of it at the moment. In light of this, I would like to apologize to all of you, my dearest friends, family and loved ones for any pain, anger or sadness I have caused you in this past year, and the years prior. I try to live in such a way that my life has a positive impact on those surrounding me, and I recognize that sometimes I fall horribly short of that intention.

I wish you a fruitful holiday (even if you aren’t Jewish, who doesn’t love an extra re-set?!) and peaceful, healthy year ahead.

view of East Jerusalem from the Old City 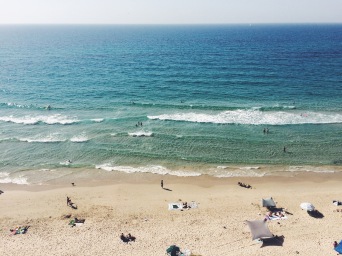 exploring Jerusalem with the Goors